As conflict gripped the galaxy, Satine Kryze's New Mandalorians adhered to their strict, pacifist stance, refusing to take sides in the Clone War. Kryze was well aware of the cost of conflict, having previously dealt with terrorist activity on her homeworld perpetrated by the Death Watch. This splinter group believed in returning to the old warrior ways of Mandalore, claiming that her policy of non-violence was an insult to their traditions. Despite countless attacks and assassination attempts on her life, Satine is determined to uphold her ideals of peace. 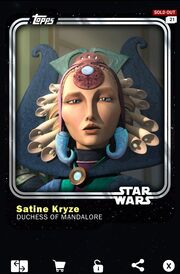 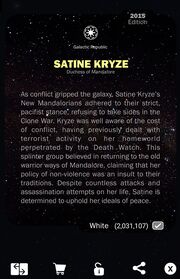 Retrieved from "https://starwarscardtrader.fandom.com/wiki/Satine_Kryze_-_Duchess_of_Mandalore_-_Base_Series_1?oldid=35086"
Community content is available under CC-BY-SA unless otherwise noted.