The former Nightbrother tribal head was once a brave and compassionate leader, sharing his duties with his younger brother Feral. After his transformation, he becomes a pawn in Asajj Ventress' plan for revenge against her former master, Count Dooku. His Lightsaber skills, although unrefined, proved to be too much for his two masters and they fled when they had the opportunity. After discovering his relation to the Sith Lord Darth Maul, he fought to restore his brother's damaged mind and vowed to help him in his quest for vengeance against the Jedi Obi-Wan Kenobi. 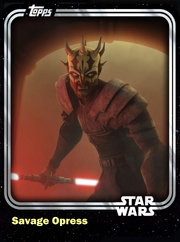 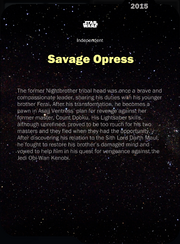 Retrieved from "https://starwarscardtrader.fandom.com/wiki/Savage_Opress_-_Sith_Apprentice_-_Base_Series_1?oldid=36061"
Community content is available under CC-BY-SA unless otherwise noted.