Sebulba, an aggressive and obnoxious Dug, hails from the city of Pixelito on the planet Malastare. A former slave, he buys his freedom with winnings from various podraces, a dangerous but popular spectator sport that he masters over time. In the famous Boonta Eve Classic, Sebulba faces the superior skills of a local rival, youthful Anakin Skywalker. The Dug is defeated in this harrowing event but manages to survive. He purchases Skywalker's super-fast podracer a short while later from Qui-Gon Jinn. 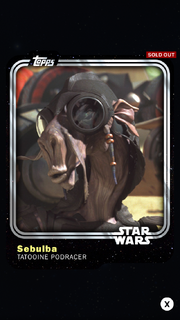 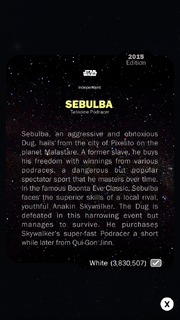 Retrieved from "https://starwarscardtrader.fandom.com/wiki/Sebulba_-_Tatooine_Podracer_-_Base_Series_1?oldid=32352"
Community content is available under CC-BY-SA unless otherwise noted.