Born on the planet Naboo, the child of an influential family, Sheev Palpatine has served for years as his homeworld's ambassador. In the wake of a political crisis involving the Trade Federation's blockade of Naboo, he is elected Supreme Chancellor by the Galactic Senate, replacing a failed Finis Valorum. Queen Amidala is one of many well-respected voices that speaks in support of this seemingly benevolent galactic leader. 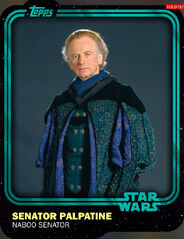 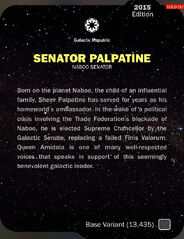 Retrieved from "https://starwarscardtrader.fandom.com/wiki/Senator_Palpatine_-_Naboo_Senator_-_Base_Series_1?oldid=32134"
Community content is available under CC-BY-SA unless otherwise noted.