Born on an unknown world, Shmi Skywalker endures an early life of slavery, taken from one star system to another by several masters. She gives birth to a son named Anakin, but this boy is conceived without a father, something Shmi is at a loss to explain. Ten years later, she sees her adventuresome young son, winner of the Boonta Eve Classic Podrace, freed from bondage at last through the clever manipulations of visiting Jedi Qui-Got Jinn. Though she is sad to watch Anakin depart, Shmi accepts his larger destiny. 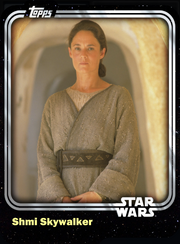 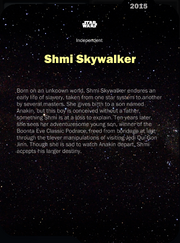 Retrieved from "https://starwarscardtrader.fandom.com/wiki/Shmi_Skywalker_-_Tatooine_Slave_-_Base_Series_1?oldid=32410"
Community content is available under CC-BY-SA unless otherwise noted.