Clone Shock Troopers are part of the Coruscant Guard and are distinguished by red markings in their armor. While most of the clone army was created on Kamino, some clones were secretly bred on Coruscant. These specially selected clones were trained for deployment in urban environments and their proficiency in close quarter combat makes them the perfect security force for capital of the Republic. They also act as bodyguards for Republic officials and other diplomats. 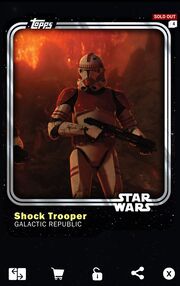 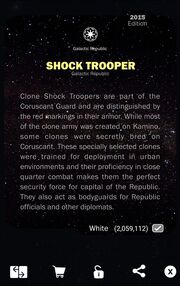 Retrieved from "https://starwarscardtrader.fandom.com/wiki/Shock_Trooper_-_Galactic_Republic_-_Base_Series_1?oldid=38512"
Community content is available under CC-BY-SA unless otherwise noted.