As Presidente of the Commerce Guild, Shu Mai controls the pooled financial resources of some of the galaxy's largest corporations. She uses her influence to gain a seat on the Separatist Council, but tells Count Dooku that the Guild will only covertly support his movement. It is a secret allegiance that leads to her death on Mustafar. 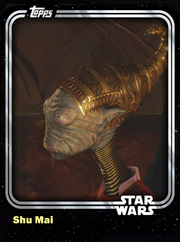 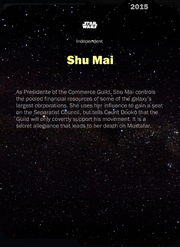 Retrieved from "https://starwarscardtrader.fandom.com/wiki/Shu_Mai_-_Commerce_Guild_Presidente_-_Base_Series_1?oldid=31954"
Community content is available under CC-BY-SA unless otherwise noted.