During the attempted execution of Luke Skywalker, Han Solo and Chewbacca at the Great Pit of Carkoon on Tatoooine, these guards, made up mostly of mercenaries and slaves are assigned to keep their prisoners in line. However, after Jabba the Hutt's refusal to release Skywalker and his friends, all of these Skiff Guards either perished in the Sarlacc pit below, or are struck down by Skywalker's Lightsaber in the chaotic escape that follows. 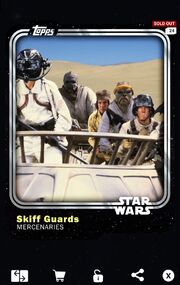 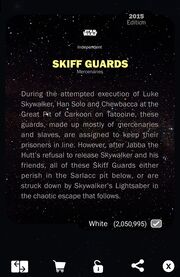 Retrieved from "https://starwarscardtrader.fandom.com/wiki/Skiff_Guards_-_Mercenaries_-_Base_Series_1?oldid=38513"
Community content is available under CC-BY-SA unless otherwise noted.