After the failed invasion of Naboo, the Trade Federation realizes it needs to upgrade its defense forces. The results were the sturdier B2 Super Battle Droids. Deep within the torso is the droid's processing unit, which makes it less susceptible to damage during battle. Much more aggressive that their B1 predecessors, Super Battle Droids will attack their own infantry in order to advance on their enemies. 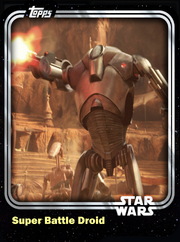 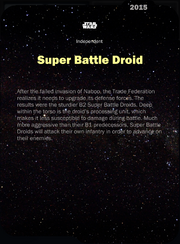 Retrieved from "https://starwarscardtrader.fandom.com/wiki/Super_Battle_Droid_-_Separatists_-_Base_Series_1?oldid=38916"
Community content is available under CC-BY-SA unless otherwise noted.