Taun We is a female Kaminoan living on the water world of Kamino, an Outer Rim planet noted for its major cloning facilities. She is the administrative aide of Prime Minister Lama Su, and both were heavily involved in the creation of a massive army of clone troopers commissioned by Jedi Master Sifo-Dyas. We and Su mistakenly assume that visiting Jedi Obi-Wan Kenobi is checking up on the status of that order, although Kenobi is in truth stunned to see huge ranks of sophisticated, ready for action clones. 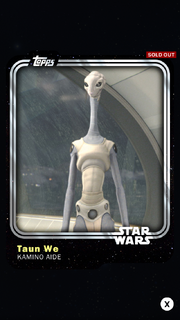 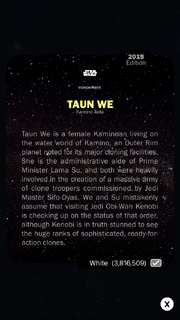 Retrieved from "https://starwarscardtrader.fandom.com/wiki/Taun_We_-_Kamino_Aide_-_Base_Series_1?oldid=40323"
Community content is available under CC-BY-SA unless otherwise noted.