Tauntauns are highly adept at surviving the punishing and snowy environments on the planet of Hoth. Along with a mixture of scales and fur covering their hides, a thick layer of blubber helps insulate their organs. Tauntauns also have two sets of nostrils; the larger ones are used for maximum oxygen intake during physical activity, while the smaller ones are suited to keep snow out while they are inactive or grazing. Alternating between the two help regulate its body heat at even the lowest temperatures. Tauntauns are known to spit at the eyes of its predators with great accuracy. Although the saliva itself is non-lethal, in Hoth's icy climate, it may freeze in an instant, causing damaging effects. 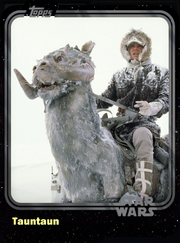 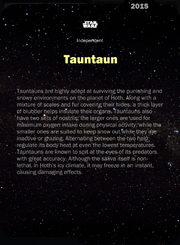 Retrieved from "https://starwarscardtrader.fandom.com/wiki/Tauntaun_-_Creature_-_Base_Series_1?oldid=38906"
Community content is available under CC-BY-SA unless otherwise noted.