Highly skilled in demolitions, the former bounty hunter from Sullust sought to use his destructive expertise to aid the Rebel Alliance and bring down the Empire. Assigned to Blue Squadron under the callsign Blue 5, Numb is given orders to lead an attack against Imperial command ships during the assault on the second Death Star. After heavy bombardment, Numb and the rest of his B-wing squadron are able to bring down two Imperial Star Destroyers. 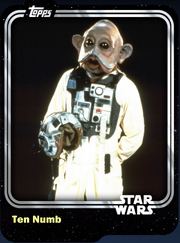 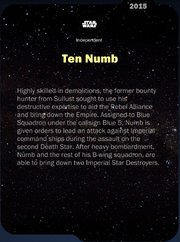 Retrieved from "https://starwarscardtrader.fandom.com/wiki/Ten_Numb_-_B-Wing_Pilot_-_Base_Series_1?oldid=34594"
Community content is available under CC-BY-SA unless otherwise noted.