Toryn Farr is the chief communications officer of Echo Base on the planet of Hoth, serving in the Rebel command center. She and her pilot sister Samoc join the Rebellion at a young age and excel in their chosen areas of expertise. During the Battle of Hoth, Toryn Farr commands the base's ion cannon when to fire on Imperial ships in orbit. She also issues the command that disables the Star Destroyer Tyrant, allowing the first GR-75 medium transport, the Quantum Storm, to escape through the blockade. 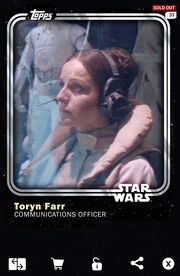 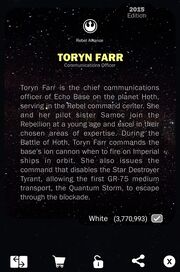 Retrieved from "https://starwarscardtrader.fandom.com/wiki/Toryn_Farr_-_Communications_Officer_-_Base_Series_1?oldid=40314"
Community content is available under CC-BY-SA unless otherwise noted.