A moisture farmer living on the planet Tatooine, Owen Lars, like his father Cliegg, is content with a meager existence for both himself and dutiful wife Beru Whitesun. But the couple's restless young nephew, Luke Skywalker, their charge since infancy, yearns for a grander destiny. Sympathetic but upset about the boy's preoccupation with starfighting and the Rebel Alliance, Owen has reason to be concerned that Luke might be following the path of his adventuresome father. 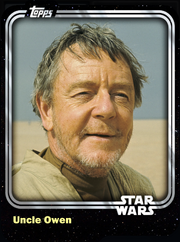 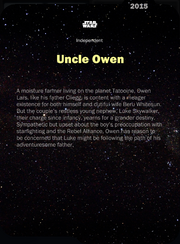 Retrieved from "https://starwarscardtrader.fandom.com/wiki/Uncle_Owen_-_Moisture_Farmer_-_Base_Series_1?oldid=32125"
Community content is available under CC-BY-SA unless otherwise noted.