The foreman of the Techno Union, Wat Tambor was one of the original and most fervent Seperatist leaders, pledging his loyalty and his Battle Droid armies to Count Dooku at a pivotal meeting on Geonosis. Later in the war, Tambor was appointed emir of Ryloth. His occupation was a cruel one, in which Tambor stripped the Twi'leks of whatever valuables he could find, then bombed their villages. In the closing moments of the Clone Wars, Wat Tambor and the rest of the Seperatist Council are assassinated by Darth Vader on Mustafar. 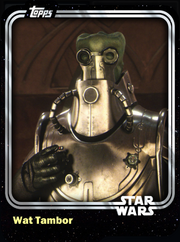 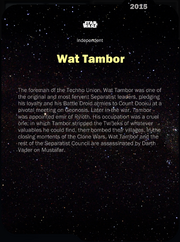 Retrieved from "https://starwarscardtrader.fandom.com/wiki/Wat_Tambor_-_Techno_Union_Foreman_-_Base_Series_1?oldid=35998"
Community content is available under CC-BY-SA unless otherwise noted.