Celebrated Corellian pilot, Wedge Antilles emerges as one of the greatest heroes in the war between Alliance forces and the Galactic Empire. In addition to being allied with Luke Skywalker and a vital part of his famed Red Squadron, Antilles enjoys a unique distinction: he is the only warrior to survive successful runs on the two Death Star battle stations. He flies as Red Leader in the decisive Battle of Endor striking the blow alongside Lando Calrissian that triggers Death Star II's spectacular self-destruction. 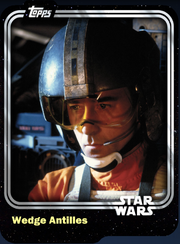 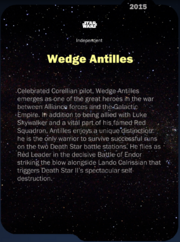 Retrieved from "https://starwarscardtrader.fandom.com/wiki/Wedge_Antilles_-_Rogue_Leader_-_Base_Series_1?oldid=40378"
Community content is available under CC-BY-SA unless otherwise noted.