Famed as a hero of the Rebel Alliance and the New Republic, Corellian pilot Wedge Antilles is one of the very few to survive the Battle of Yavin which results in the destruction of the Empire's infamous Death Star battle station. He and good friend/fellow star pilot Luke Skywalker build Rogue Squadron into a peerless unit, ready for action on a spectacular scale when the Empire Strikes back on ice planet Hoth, calling enormous AT-AT Walkers into play. 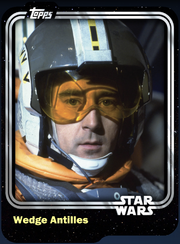 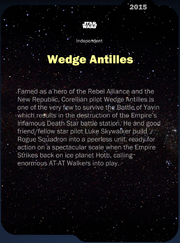 Retrieved from "https://starwarscardtrader.fandom.com/wiki/Wedge_Antilles_-_Snowspeeder_pilot_-_Base_Series_1?oldid=30877"
Community content is available under CC-BY-SA unless otherwise noted.