A famed Alliance pilot from Corellia, Wedge Antilles held the distinctions of being the only pilot to fly against the first and second Death Stars. At Yavin, Wedge pulled a daring maneuver to save Luke Skywalker from a pursuing TIE fighter. Flying as part of Rogue Squadron at the Battle of Hoth, Wedge and his gunner Janson used a tow cable to take down one the Empire's dreaded walkers. 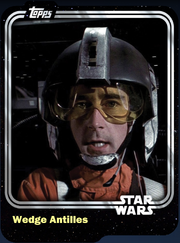 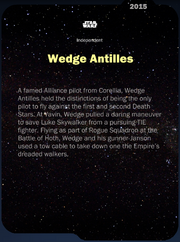 Retrieved from "https://starwarscardtrader.fandom.com/wiki/Wedge_Antilles_-_X-Wing_Pilot_-_Base_Series_1?oldid=40380"
Community content is available under CC-BY-SA unless otherwise noted.