Wuher is a familiar face to many a Mos Eisley space traveler: he is bartender in Chalmun's Cantina. Many have noted his gruff persona, and the fact that he enjoys having relatively defenceless droids removed whenever possible. Wuher's less than pleasant disposition stems from an unhappy childhood on Tatooine, where the orphaned boy at least managed to develop an interest in chemistry. As a result, he now scores as a bartender extraordinaire, able to serve correctly-mixed drinks to being of many species. 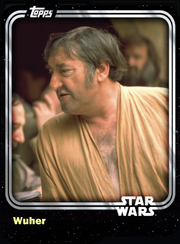 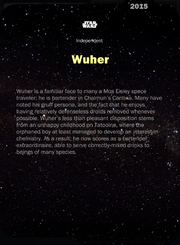 Retrieved from "https://starwarscardtrader.fandom.com/wiki/Wuher_-_Cantina_Bartender_-_Base_Series_1?oldid=32647"
Community content is available under CC-BY-SA unless otherwise noted.