Sharp minded and highly disciplined, Wullf Yularen has strong loyalties to the Galactic Republic and later, the Galactic Empire. Despite his retirement from the Republic Senate's Bureau of Intelligence, he is encouraged to join the Republic Navy by Supreme Chancellor Palpatine, awarding him the rank of Admiral, making him the youngest member of the naval corps to achieve this rank. He is given command of General Anakin Skywalker's flagship, the Resolute, though he has doubts about the young Jedi's reputation for recklessness. After the Clone Wars, he attains the rank of Colonel of the Imperial Security Bureau and serves aboard the Death Star 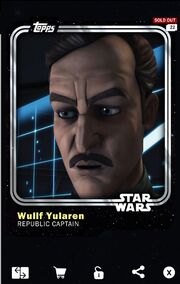 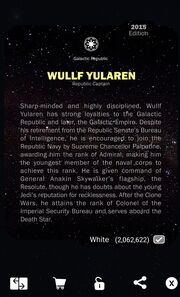 Retrieved from "https://starwarscardtrader.fandom.com/wiki/Wullf_Yularen_-_Republic_Captain_-_Base_Series_1?oldid=38514"
Community content is available under CC-BY-SA unless otherwise noted.