The ancient Zillo Beasts used to roam Malastare freely before they were killed off. One remained and was eventually captured by the Republic, but subsequently escaped and caused havoc around Coruscant. Eventually it had to be put down, but not before Chancellor Palpatine ordered it to be cloned. 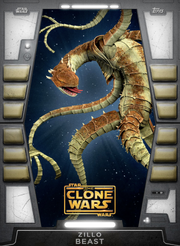 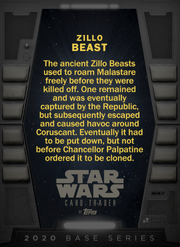 Retrieved from "https://starwarscardtrader.fandom.com/wiki/Zillo_Beast_-_2020_Base_Series_2?oldid=41640"
Community content is available under CC-BY-SA unless otherwise noted.